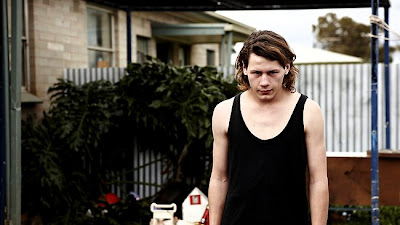 Last week I had the pleasure - if pleasure is the right word to describe such a disturbing but powerful film - of seeing the new Australian film Snowtown. I've written a detailed review over at Arts Hub, which you can read here, but here's an excerpt to whet your appetite:

Thanks in part to Adam Arkapaw’s accomplished and voyeuristic cinematography, the movie quickly and deliberately distances the audience from the events it depicts. This is not a film which asks the viewer to identify with its protagonists; rather, its actions unfold with the viewer held resolutely at arms length. Tight editing and an ominous score ensure that it remains a compelling and unsettling experience.

The involvement of mostly non-professional performers ensures that the audience is never distracted by stars pretending to be members of a socially and economically deprived underclass (a jarring flaw of Ana Kokkinos’s Blessed); and their presence, coupled with the film’s subdued realism and the filmmakers’ decision to shoot in the locales in which the movie is set, ensure an immediate and unsettling verisimilitude.

Conveying a palpable sense of menace and unease, Snowtown draws power from what it does not show, though its brief scenes of violence are disturbing in the extreme. Shaun Grant’s script is excellent, as is Kurzel’s direction. As Bunting, Henshall is a revelation: an attentive, charming monster, and utterly compelling.

The film is not entirely successful – the large cast of characters lack definition, and are occasionally indistinguishable as a consequence; while the final act of the film ... lacks the palpable sense of tension that makes the first two thirds of the movie so memorable – but overall, Snowtown is a remarkable, albeit disturbing film, and a compelling portrayal of the banality of evil.

I will be discussing Snowtown with fellow critics Cerise Howard and Tara Judah at a special 3RRR subscribers' preview at Cinema Nova this Tuesday. Perhaps I'll see you there?
Posted by richardwatts at 11:49 am

I had the opportunity of seeing Snowtown and can only describe as hate-able. A film that should never have been made, much less screened to the public. If you want to make a documentary Mr Kurzel, by all means go and do that, but please dont make a film that is so reprehensible. It isnt compelling, entertaining or enlightening. It is an appalling and nasty film.

I suspected the film would divide its audience, RB, and your comment indicates it is doing just that. I'm sorry you didn't enjoy the film, and I welcome your comment, but I do question your claim that it 'should never have been made'.

Through film, through theatre, and through the arts in general we have the opportunity to explore some of humanity's most reprehensible acts and emotions. Why should the events explored in SNOWTOWN be off limits, when so many other events (the Holocaust, the rape and murder of Anita Cobby, the sinking of the Titanic) are not?

As a work of art, I think SNOWTOWN is utterly compelling. Deeply disturbing, yes. Frightening, yes. But also a film of undeniable impact and power, by a filmmaker very much in control of his craft.

I can't say I felt the film was hate-able, but it certainly left me disturbed. There is a rape scene that borders on the most disturbing scene I have ever witnessed on film but, as discussed at a post-screening Q and A last night, much of the actual violence happens off-screen. What I found most difficult about the film was the lack of like-ability of any of the characters. I needed a hero to sheild me from the bleakness of this yet I was abandoned very early on. A trying view.

I haven't seen SNOWTOWN yet... I plan to soon but there are less theatres in Canberra that show such things (we fear the darkness) and so I may have to wait until I'm in Melbs next.

But, on the question of the banality of evil, I thought I would post this from Hannah Arendt:

'the murderers were not sadists or killers by nature; on the contrary, a systematic effort was made to weed out all those who derived physical pleasure from what they did...[Eichmann] did not need to 'close his ears to the voice of conscience', as the judgement has it, not because he had none, but because his conscience spoke with a 'respectable voice', with the voice of respectable society around him.'

Is this an accurate description of how evil is portrayed in the film?

This was definitely not a work of art. It used just about every film cliche known and was simply gratuitous. It was laborious at times (how many times do you need to see a family eating at a dinner table) confusing at others, and in it's appalling effort to shock it was simply grotesque.

We all have a little thing called morbid curiosity. Its that thing that makes it impossible not to look at a car crash or carcass. And this was both.

OK RB, now I'm genuinely curious. "It used just about every film cliche known'? Can you give a few examples, please?

As to being gratuitous - I thought it showed remarkable restraint, very rarely showing violence on screen, instead preferring to focus on the psychology of Jamie Vlassakis and the way Bunting slowly coerced him into becoming a killer...

David - no, this is a different kind of evil; one motivated by self-righteousness and Social Security fraud; but an evil which played out in suburban backyards in an all-too-familiar locale...

Lov your blog Richard! Must do a coffee next time I'm in Melb!

David, all I can say is DO NOT see this film.

I could never RESPECTFULLY disagree with Richard or any reviewer more.

This film did not need to be made. Just because it is about a horrific event doesn't mean it should be made. I understand what you're trying to say, but some films about the holocaust are rubbish too, but some which work. This film can't be compared to that. People are becoming desensitized.

It's arrogant, nasty and completely hypocritical. It's not even the violence which is the worst part. It's the total contempt for which the director has for it's viewers, the victims of Snowtown and their families.

And with respect, Anon, I completely disagree - especially with your suggestion that the filmmakers were contemptuous of the victims and their families.

Everything I've read about the film suggests the exact opposite - that the director (who grew up in Adelaide's inner north) approached the project with tremendous respect.

If you can point me in the direction of information to the contrary, I'd love to see it.

Richard, glad to see some intelligent people on the Internet... unlike a few of the other comments here. Cheers.

I take issue with a comment left here that they needed a hero, there were no heroes the actual events and I think to make heroes out of something that really is completely void of any would be more offensive to the victims’ families than actually showing the violence.

Actually Dylan, I think you've misread that comment. The person who posted it said 'I needed a hero to sheild me from the bleakness of this yet I was abandoned very early on.' In other words they were talking about their own experience of watching the film, not the experience of the people the film is based on.